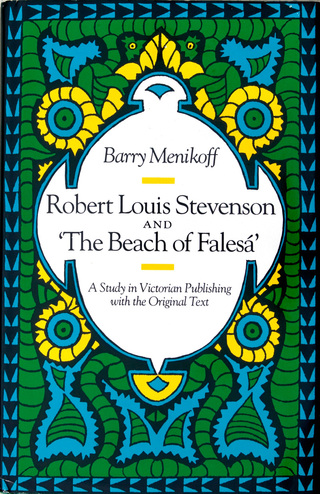 Robert Louis Stevenson and 'The Beach of Falesá': A Study in Victorian Publishing

The distance that separated Stevenson from London and New York further contributed to his publishing difficulties. Serialization, trade announcements, synchronization of English and American book publication--all these details had to be managed separately and jointly by Cassell and Scribner's, with an author who was at least one month away by steamer mail. And at the center of this correspondence was Stevenson, whose capacity to remain consistent in his demands was never very considerable. The further Stevenson got from his publishing centers, the more problems his manuscripts encountered. Finally Stevenson's own attitude toward his personal life and his writing exacerbated problems that had been evident in publishing his work at least since the appearance in 1889 of The Wrong Box. For one thing, he had a heightened sense of urgency about his finances, which was really a sense of urgency about supporting his family in the manner to which they had become accustomed. To that end he would engage himself in as many projects as he could, maximizing his profits as quickly as possible. Furthermore, Stevenson, like most of his contemporaries, did not have an iconic view of the artist's work. Meticulous and conscious a craftsman as he was, he wrote for publication and whatever glory might come by the by. He was not one to hold back his text over a disagreement about language or contents.

Stevenson, like so many of his fictional creations, had a divided view of himself as an artist and of his art. He had no doubts about his capacity for fiction or about his place among novelists, past and present. But, paradoxically, he wondered about the entire pursuit of art He often reflected on the contrast between his family, builders of lighthouses, and himself, maker of fictions. Surely a tension as deep as this, a division of identity so profound as to form the structure of all his major work must have expressed itself in the indifference or possibly resignation with which he treated the publication of Falesá. He abandoned it to Colvin and the pubishers, and by doing so he abandoned it to his readers.